Episode 41: How Stand-Up Saved Me with Host Shereen Kassam - FunnyBrownGirl: Host of Award-winning podcast for artists and creatives
16678
post-template-default,single,single-post,postid-16678,single-format-standard,ajax_fade,page_not_loaded,boxed,,qode-title-hidden,qode_grid_1300,qode-content-sidebar-responsive,qode-theme-ver-17.2,qode-theme-bridge,disabled_footer_bottom,wpb-js-composer js-comp-ver-5.6,vc_responsive 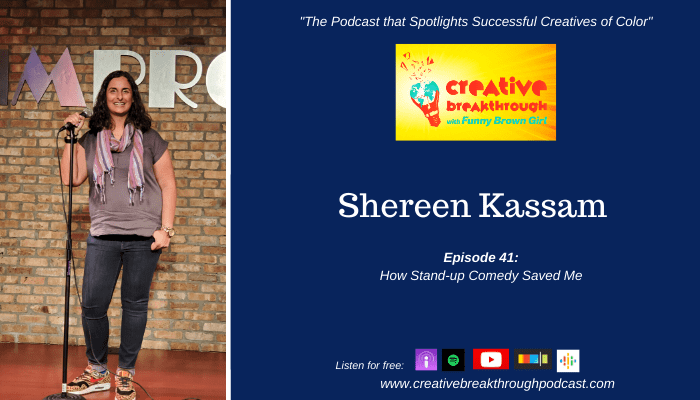 05 Dec Episode 41: How Stand-Up Saved Me with Host Shereen Kassam

This week’s guest: Me, your host – Shereen Kassam aka the Funny Brown Girl!

Shereen Kassam has been named “Funniest Female in Florida” and has performed on HBO and NBC.

After receiving her Bachelors from Brown, an MBA from The Wharton School at the University of Pennsylvania, and working for Fortune 100 firms including Deloitte, Amazon, JPMorgan, and Disney, Kassam decided she wanted more from life.

That’s when she discovered entertainment – specifically stand-up comedy.  Her first time on stage, Kassam realized she was born to perform.  She is now an internationally touring stand-up comedian who has performed worldwide on stages from New York to Saigon.  She has appeared on HBO and NBC, worked with Arsenio Hall and Preacher Lawson, and hosted the International Arts Festival in Lisbon, Portugal.  Kassam is also the host of the award-winning podcast – Creative Breakthrough – where she shares strategies and inspiration to pursue one’s creative passions and is a guest host on iHeartRadio’s #1 Morning Talk Show.  When she’s not telling jokes, Kassam also acts and speaks on subjects ranging from Work-Life Balance to Creativity.

Kassam currently resides in Orlando, Florida and has a difficult time saying no to chicken wings.

“Art leads you back to the person you were after the world took you away from yourself.”

This quote embodies everything I want to talk about today.

For me, discovering stand-up comedy helped me develop in to the woman I am today.  But it also allowed me to rediscover my voice, my confidence, and most of all my sense of worth.

When I was 19 years old, I had just completed my freshman year at Brown.  Life was great.  I had no qualms, no issues, and no stress.

I attended a camp that summer.  It was a privilege to be invited and I didn’t hesitate to say yes.

The first day of camp, I went to sleep as I always do. Until I woke up with a member of the camp’s leadership board on top of me.

My life changed that night.  Not only because of the incident of that night, but what followed.

No one cared.  No one wanted to listen.  Not the women, and definitely not the men.  They all had excuses.  I was told to go to sleep and I’ll feel better in the morning.  Some said it’s just fun and games.  Others said it’s not a big deal, it happens.  Fathers who had daughters.  Mothers who had sons.  Women I considered friends.  Men I considered my brothers.

No one listened to me.  My calls and my emails went unanswered for days that became weeks that became months.  I quickly felt my voice stripped away from me.  I was in a deep depression.

For years, I had nightmares, turned to alcohol, and stopped being an active member of society.  I was hurt and angered.  At times I felt like giving up.

Then I discovered stand-up comedy.  Why I started stand-up is a crazy story.  I had never seen a live stand-up show, but a friend dragged me to a show against my will.  I bored silly, with dude after dude telling the same jokes about their wives, dogs, and gentiles.  After the show, I demanded a refund.  And well, I didn’t get my refund.  Instead I was told to try comedy and see how difficult it is to make people laugh.  I took on that challenge.  The first time I got on stage and I heard the crowd roar in laughter, I knew I found my calling.

But deep down inside, I loved stand-up because I finally had a voice again.  I could I get on stage, share my views of the world, and people listened.  People were engaged in what I had to say. It was such an amazing feeling to be confident again after all those years.  To discover a part of me that had become hidden.  I poured my time in to comedy.

A few years ago, I discovered that the man who had assaulted me was now in a leadership role that oversaw the camp! I was outraged.  I spoke out again.  It wasn’t any different 15 years later – people still wanted to ignore the situation.  But this time I was stronger and more vocal.  People started responding to my calls and emails.  Slowly changes started to happen.   The leaders of the camp agreed we should have a sexual assault policy in place, as well as an escalation policy if this happened again.  These policies were introduced nationwide this summer.  The man who assaulted me suddenly resigned.  I received an apology from leadership.  And most of all – I discovered a new passion for women empowerment and mental health.

Stand-up comedy helped me find myself again and make a difference.  It was a long journey, but a necessary one.  I can’t go back and save all the other women who may have come in contact with this predator, but I can at least protect women going forward.

I also finally took the necessary steps I need to heal and started to see a therapist this year.  Holding on to all that anger for so many years was not healthy.  It was a relief to finally share how I felt with someone who cared, who understood, and who gave me the confidence to fight.

Whether you are dealing with grief, a breakup, or any other hardship, I urge you to pour that emotion in to your art, seek help, and most of all, remember you are worthy and able to overcome whatever life is throwing at you.

With that I wish you all a safe holiday season and please if you need someone to talk to please reach out to the National Suicide Prevention Lifeline that’s available 24 hours every day and is anonymous – 1.800.273.8255