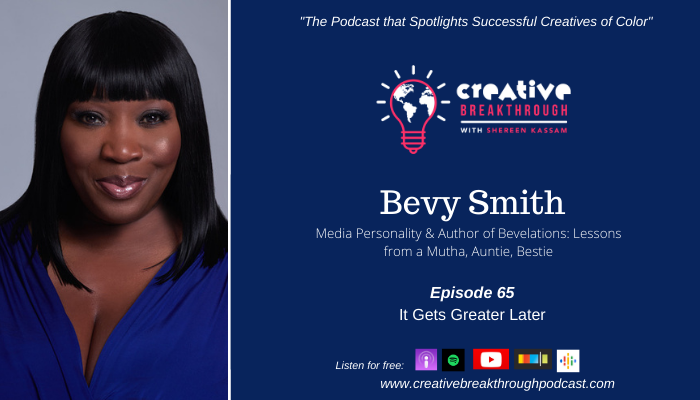 Hello Creatives! Bevy Smith joins me this week to talk about her new book Bevalations: Lessons from a Mutha, Auntie, Bestie.  Bevy shares inspiration and wisdom on everything from finding the courage to leave her 6-figure corporate job, transitioning from being a fashion executive to a media personality, becoming an entrepreneur, and more! She even drops a special Bevalation solely for listeners of Creative Breakthrough!

Who is Bevy Smith?

Quintessential Harlem girl and life-long New Yorker Bevy Smith is the host of Sirius XM’s “Bevelations” on Radio Andy.  Once a wildly successful luxury fashion publishing exec, Bevy shifted her professional goals over a decade ago to pursue a life in front of the camera. A pop culture aficionado and fashion expert, Bevy served as moderator of Bravo TV’s revolutionary “Fashion Queens,” for three seasons and was host on the nationally syndicated “Page Six TV,” for two years.  Bevy continues to be part of “The Wendy Williams Show’s Style Squad.” Smith’s debut book “Bevelations: Lessons from a Mutha, Auntie, Bestie,” which details her transition from a fashion advertising executive into a media personality published through Andy Cohen Books dropped last week.

Why did Bevy Smith write Bevelations: Lessons from a Mutha, Auntie, Bestie?

Bevy’s goal with the book is to tell readers her story, the good and the gritty, the bad and the bougie, from being a shy nerdy girl who gets bullied in Harlem, to being “the only one” in corporate spaces.  Her life pursuing a high powered fashion advertising career, to being 38 years old and BELIEVING that she could become a TV personality without selling her soul on reality tv.  Bevy turned 54 last year and she hopes to inspire people to chart their own course, dare to dream and to know that life definitely Gets Greater Later.

In her signature lively and infectious voice, Bevy provides her story as an example of how we too can manifest our biggest dreams.  From reclaiming her bold childhood nature and realizing she’d become a Googleable star to envisioning where she’s headed next, Bevy shows how each of us can live our best lives with honesty and joy.

Mission behind Bevelations: Lessons from a Mutha, Auntie, Bestie:

Lighting Round with Bevy Smith:

Where can you purchase Bevelations: Lessons from a Mutha, Auntie, Bestie?

Where can you find Bevy Smith online?