Bob Sumner: How to Be a Star - Shereen Kassam | FunnyBrownGirl

Bob Sumner: How to Be a Star 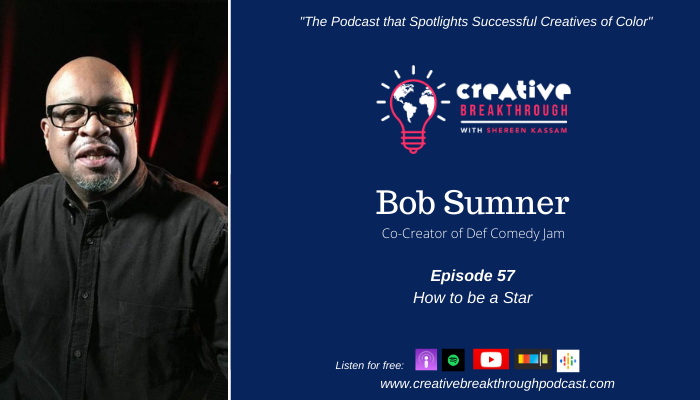 This week, we continue our conversation with the Founder of Def Comedy Jam – Bob Sumner.  Bob Sumner is best known as the co-creator of HBO’s Russell Simmon’s Def Comedy Jam, and the man behind most comedy legends including Kevin Hart, Bernie Mac, and more!

This season, I’m going to spend a lot of time talking about monetizing your creative passion and side hustles.

With many cities starting to open up performance spaces such as bars, clubs, and theater spaces I want to share some personal thoughts.

So you do not need to start charging less than you are worth.

Yes, we are all excited to get back out there and start performing.  Yes, there may be less people in the seats due to social distancing.  Yes, the promotor may tell you he won’t be making as much money from each show.  But no, that doesn’t mean you are worth any less.

I’ve been getting tons of audition requests for acting.  Pre-Covid these requests were for $1500 to $2000 for a one year buy out.  Now?  These requests are for $400 and for use for life.  That’s cheap! And as much as I want to act again, and perform, I cannot allow myself to sell my image for life for $400 and neither should you.

The companies paying for these commercials stand to gain thousands of dollars from these ads, so why shouldn’t you also benefit?

As your cities start opening up and people start reaching out to you to perform, please do not perform for free if the producers of the shows/commercials stand to make money.

Because if we all go out and perform for free, we set a precedent of how much we value ourselves and of our talents.

And if you don’t get paid, how are you going to survive on your art?

This week I continue chatting with Bob Sumner –

On the previous episode, Bob shared his vision for Def Comedy Jam, what he looks for in talent, and his advice to creatives.

Who is Bob Sumner?

Bob is best known as the co-creator of HBO’s Russell Simmon’s Def Comedy Jam, a recognized force in the world of comedy and the man behind most comedy legends.  With over 25 years of experience, Bob has discovered many of the top gifted comedians that have graced the stages and big screens around the world, including Kevin Hart, Bill Bellamy, Mike Epps, Dave Chapelle, Sheryl Underwood, Chris Tucker, Cedric The Entertainer, and Bernie Mac.  One day, he will add me to this list!

Bob is the executive partner in LaffMobb Enterprises which has produced specials that have aired on Showtime, DirectTV and OnDemand.  He is also the executive producer of LaffMobb’s We Got Next and LaffMobb’s LaffTracks.

So what are we waiting for, let’s get started.