Episode 50: How to Adapt and Adjust to COVID-19 with Comedian Damon Williams - Shereen Kassam | FunnyBrownGirl

Episode 50: How to Adapt and Adjust to COVID-19 with Comedian Damon Williams 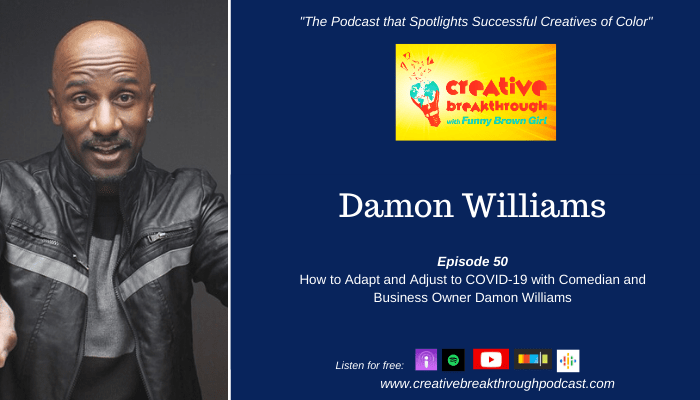 Comedian Damon Williams: How to Adapt and Adjust to Changing Times (COVID-19)

Damon Williams is an internationally touring comedian who has been seen on Showtime at the Apollo, BET’s Comic View, and The Tom Joyner Sky Show.  We chat about the emotional and financial impacts of COVID-19 and Damon’s advice to creatives during this unprecedented time.  Participate in Damon’s #steptothemic competition on Instagram

Shereen Kassam aka Funny Brown Girl shares her thoughts from self-quarantine – everything from how she’s surviving without comedy to almost being arrested for stealing.

Free course on Happiness:  The Science of Well-Being

Donate to my Podcast Fund: www.ko-fi.com/funnybrowngirl

Donate $20 or more, and we can schedule a 30 minute Skype call to chat about your creative journey and challenges

Who is Damon Williams?

With 25 years in the industry, Damon Williams is a former Subway sandwich shop owner from Chicago, IL who began his comedy career at All Jokes Aside Comedy club. Damon’s previous television appearances include BET’s Comic View dating back to 1994, including his own one-hour special. He’s been featured on BET LIVE, Comedy Central’s Premium Blend, The Tom Joyner Sky Show on TV ONE, and HBO’s P Diddy’s Bad Boys of Comedy.

performed for over 300,000 fans as the opening act for the highly successful Kings of

Comedy Tour, establishing him as one of the elite comics in the nation.

His popularity has provided him the opportunity to work with some of the biggest stars in the business such as Aretha Franklin, Pattie Labelle, Luther Vandross, Ray Charles, Harry Belafonte, Chris Rock, James Brown, Jamie Foxx, Little Richard, and even President Barack Obama – where he served as host for a campaign brunch.