My TEDx Talk is LIVE! Plus How To Be a TEDx Speaker - Shereen Kassam | FunnyBrownGirl

My TEDx Talk is LIVE! Plus How To Be a TEDx Speaker 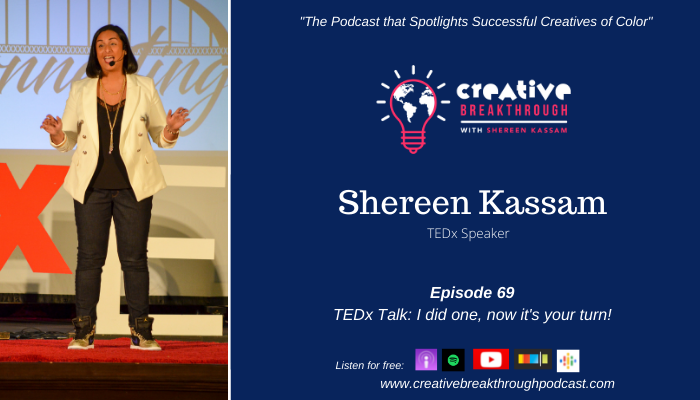 Here are 5 tips on how to be a TEDx speaker

In January 2022, I spoke at my first TEDx* conference in Eustis, Florida.  For those of you wondering, Eustis is about 45 minutes outside of Orlando also known as the home of Disney World!

You can watch the video HERE.  It’s pretty entertaining, if I do say so myself.

If you’re interested in the process, read on as I share with you how I went from THINKING about doing a TEDx talk to actually DOING a TEDx talk.

How to be a TEDx Speaker in 5 Steps:

It all starts with the application process.  Think of a TEDx application like a college application.  Applying to college is competitive, and so is being selected to do a TEDx.  Do not wing (pun intended – if you don’t get it make sure you watch my talk!) your application.  The application is where you showcase your “idea worth spreading” and convince the organizers that YOU are the best person to share this idea.  I spent more than one month on my application (but I had been thinking about potential ideas way longer than that).  I reached out to past TEDx speakers who were complete strangers and opened up to them about my deepest, darkest secrets.  I realized that if I’m not comfortable sharing my story with one stranger, how am I going to share it in a room of a thousand strangers?  I urge you to be authentic and vulnerable.  For me, the process was emotionally draining, but also cathartic.  Because when I finally decided on my “idea worth spreading” I knew this was my story. It also didn’t hurt that I got to speak about something I love – chicken wings! 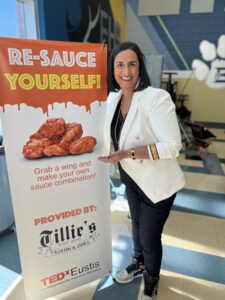 I had five months to craft the perfect TEDx talk.  FIVE MONTHS! How many of those months did I actually spend writing?  Initially, two weeks.  I submitted my first draft and the feedback I received was, “This is amazing!”  When the organizers called a few months later, asking for my final draft, I panicked.  I hadn’t done any work on it since my first draft.  Don’t sleep on the process, it will sneak up on you!

What’s worse – when I finally had my final draft ready, I sent it to a past TEDx speaker for her feedback and she responded, “I don’t get it.”  My world started spinning.  I had just written what I thought was a piece of art.  My friends said it was gold.  GOLD! And now this woman put doubt in my mind! I panicked – again! So, I popped some CBD gummies and took a nap (see TIP #5).

After that experience, I ended up hiring a coach.  I needed someone who believed in my talk, but also someone to help me fine tune my talk.  As a TEDx speaker, you have 18 minutes to share your idea.  Every word matters.

TIP #3: Put Down That Drink

Yes, I had to memorize my entire talk! And I had NO IDEA how hard that would be! When I go to the grocery store, I always end up coming home without what I initially stopped for.  But memorizing this talk made me really stop and reconsider all those tequila shots I did in college.  The good thing? My talk was only 12 minutes long.  Memorizing my talk took me 4 weeks, and that’s with removing parts of my talk that I just could not commit to memory.  At a certain point, the talk will be ingrained in you. That’s when you know you’re ready!

By the way, if you do forget a line on the day off.  Just pause. Collect yourself. And start over.  Because guess what?  They can always edit your video!

TIP #4: Practicing in Front of Your Pets Doesn’t Count

Make sure you practice! You can practice daily and everywhere – in the shower, in the car, even during sex (your partner probably won’t even realize what you’re doing).  But be careful, saying your talk in front of a mirror or to your dogs is great, but it’s not the same as when you’re in front of a live audience of people you don’t know!  I’m a stand-up comedian.  I perform in front of people for a living.  Yet, the first time I rehearsed my talk in front of people I messed up – a lot! I forgot my lines. I got nervous.  I got in my head – “Do they get it?”; “Why aren’t they laughing?”; “Why is he on his phone?” A good starting point for places to practice is your local Toastmasters group.

This is your TEDx talk.  Do not let other people influence it.  When the TEDx speaker told me she didn’t get my “idea”, and that I needed to change it, I refused.  I believed in my talk.  Ironically, a few days before my TEDx Eustis talk, the same woman e-mailed the following:

“So…I was making chicken wings (tonight) and I put the wrong sauce on them and I was like, “bummer, I just bought brand new sauce and I really want to use that” so what did I do?…re-sauce.  I could not help but think of you and that I didn’t get it.  I GET IT!!!”

I was also selfish with my time (and my health) as I prepared for my talk.  In the weeks leading up to the TEDx Eustis event, I turned down a lot of invitations to perform comedy and hang out with friends.  I wanted to make sure that I was well-rested and COVID free!

Be selfish; especially on your big day.  It’s important to be in the zone and not let anyone or anything throw you off your game.  My only stress on the morning of my talk was – ensuring my mask didn’t ruin my make-up and how I was going to keep my pants up (I had lost weight since securing my TEDx outfit). 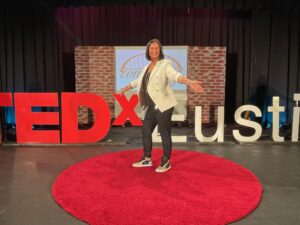 And finally, be selfish when you take the stage.  Take your time.  Enjoy the moment.  Breathe.  This is your moment to shine!

These are the steps I took to be a successful TEDx speaker!

Thanks for watching my talk, and a big thanks to TEDx Eustis for accepting me, TEDx for the platform to share my story, and all my friends and family who supported me, rooted for me, and made this possible.

Now let’s rack up those YouTube clicks, please, pretty please with a chicken wing on top!

* TEDx is an independent event operated under license from TED Talks