Episode 52: How to Create a Positive Mindset and Apply to TV Writing Competitions with Felicia Pride 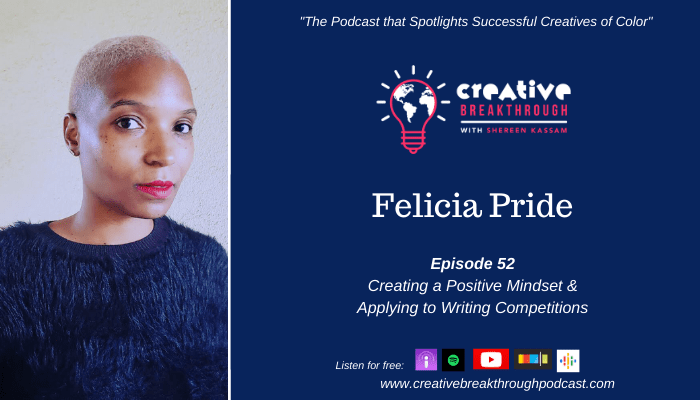 Writer/Director Felicia Pride: How to Create a Positive Mindset and Apply to Writing Competitions

This week I discuss my third week of furlough from Walt Disney World, my own creative breakthrough, and how I’m staying sane.

Felicia Pride, from episode 33, released her first short film this week – Tender.  In this episode, she talks about applying to TV Writing competitions such as NBC on the Verge, the importance of informal mentors, self-care, and patience.

Here’s the official description: After an unexpected one night stand, two women at very different stages of their lives, share an even more intimate morning after

Who is Felicia Pride?

Two weeks ago, the Hollywood Reporter’s feature No More “We Can’t Find Any Black Female Writers” profiled Black woman screenwriters — 62 to be exact — to literally prove to Hollywood that there is a great pool of Black woman writers creating exceptional content and supporting (not competing) each other in the industry. And together, we smiled on the marking of another dope step toward making the case for our visibility, representation and overall a salute to our seat at the table. As we shine a light on the women writers of color who cleverly innovate the stories we watch on screen, I’d like to introduce to you another talented Black woman writer/producer on a personal mission to elevate our stories — for us and by us: Felicia Pride.

Felicia Pride has been winning 2018. In just one year, the cultural journalist turned author turned screenwriter achieved a career trifecta: Charles D. King’s MACRO (Fences, Mudbound) picked up her first feature film (Really Love, 2019), she sold a television pilot and in October, she a writer on Ava Duvernay’s Queen Sugar which airs on OWN. And earlier this month, Pride launched “Honey Chile,” a consumer facing digital brand of her production company, Felix & Annie, aimed at Gen X women — and though she’s got over 15+ years in the writing game, it’s clear that Felicia’s rising star is next up to shine.

Popularly known among creatives as the founder and voice of The Create Daily, a resource for underrepresented creators, Felicia Pride is a thought-leader among creative content creators. From VIBE to NYC’s book publishing scene to her short film The End Again, Felicia has proven to be one to watch. Tapped by Sean “Diddy” Combs’ communications team for her writing, she also worked with the mogul on the hit FOX show, THE FOUR and has become an in-demand speaker at events nationwide, including SXSW, TEDx, Film Independent Forum and AFI Docs.

After a break from the writers life spent running her marketing consultancy focused on expanding audiences for impactful media projects, Felicia returned to her first love rejuvenated and with a fresh approach to storytelling, earning her a highly coveted spot in Film Independent’s Screenwriting Lab (2016) followed by NBC’s Writers on the Verge program (2017). She chronicles her journey from a creative rut to creative zone in a chapter series (and course!) she penned titled The Creative Comeback.