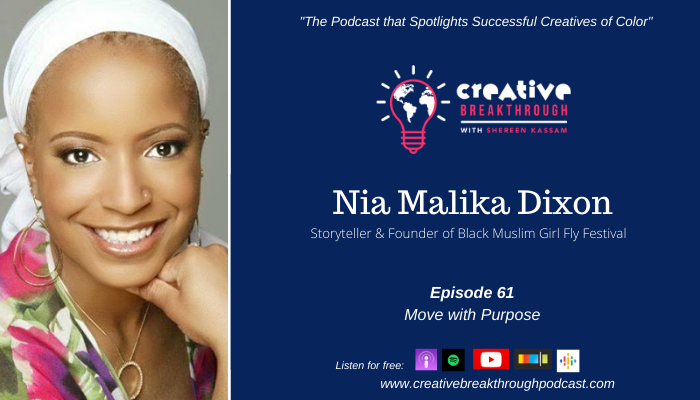 Hi Creatives! This week we chat with storyteller Nia Malika Dixon who shares her creative journey and how she moves with purpose.  Nia shares her journey to LA, finding her own production company, and creating and launching a film festival.

Welcome to the Creative Breakthrough!

For those of you tuning in for the first time, welcome.

For my OG listeners, I can’t thank you enough for your support.  Thank you for sharing this podcast.

If you are on your phone right now, press that share button and share it with a friend you think may enjoy this podcast or post it on your social media! And feel free to tag me at funnybrowngirl

I want to jump right in to today’s guest, but before we do a few announcements…

Who is Nia Malika Dixon

Nia Malika Dixon is an award–winning filmmaker on a mission to amplify diverse stories from underrepresented communities authentically in Hollywood, especially the voices of Black Muslim women. With over 15 years in the film industry, the Baltimore native hones her craft as the founder of Audaz Entertainment, where she writes, directs and produces content for television, film and digital platforms, specifically highlighting stories representing Black Muslim women and girls.

Under Audaz Entertainment, Dixon has released several projects, including short films Shattered Lenses, #BlackMuslimGirlFly: A Butterfly Amidst Iniquity and Temporary Loss of Power. Dixon creates work to cultivate deeper cultural understanding and connections in our local and global communities.

Next week, on December 13th, Nia will be producing the third annual Black Muslim Girl Fly Festival dedicated to amplifying cinematic works both established and emerging Black Muslim women filmmakers and creative talent, exploring diverse and underrepresented stories of the African diaspora across film, TV and digital platforms around the world.

Key panelists include writers, directors, and producers from Dear White People, Jinn, and the Blacklist.

The festival will be held virtually this year at seedandspark.com/BMGFlyFest

I’ll put all the details in the show notes.

So what are we waiting for….let’s get started!

What is the Black Muslim Girl Fly Film Festival

The Black Muslim Girl Fly Film Festival (BMFF) is an annual one-day event of film showcases that profile stories by Black Muslim Girl filmmakers and creative talent in the film, television and digital space. Originally founded in February 2018 with the purpose of creating a platform to showcase film content by Black Muslim women filmmakers, BMFF is also designed to create opportunities to network with industry professionals and cultivate community among Black Muslim Girls in film around the world.

On a mission to expand cinematic narratives to be more inclusive of Black women and shine a light on untold stories, the annual festival showcases dramas, documentaries, short films and episodic projects that tell the stories of Black Muslim women across the globe. Program highlights also include a diverse panel of film industry professionals and consultants, and a musical performance. Past speakers have included CEO of GameChanger, Effie T. Brown, Pearl Street Films’ Development Executive, Fanshen Cox, in addition to guest judges like Blacklist actor, Hisham Tawfiq, Director and Producer, Oz Scott. Performers including Alia Sharrief and Sa-Roc The Goddess MC have been a part of the Festival lineup.

This year at the Black Muslim Girl Fly Film Festival: