Episode 20: How to Overcome Fear 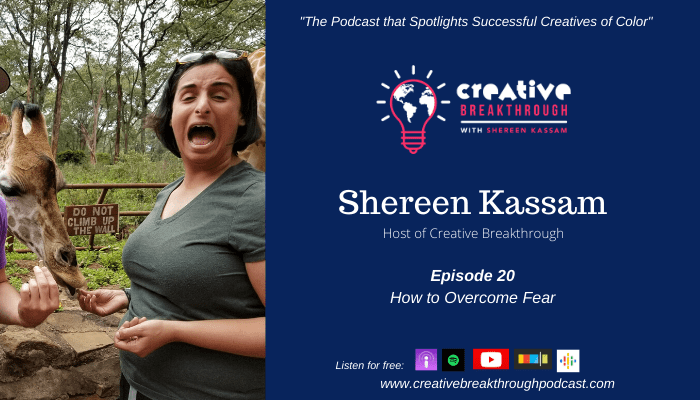 Fear stops many of us.  It stops us from telling someone we love them.  Or taking a new job in a new city.  Or even taking the first step towards our new-found passion.

Fear can debilitate us.  It can give us an excuse.  It’s strong enough to derail us.

People think I’m a strong confident woman.  That I’ve accomplished so much in life because I don’t fear anything or anyone.  They are wrong.  But while I do have fear, I don’t let it stop me.

I recently had an experience at a comedy show that instilled fear in me.  It was a type of fear I never imagined feeling while doing something I love.  This fear derailed me.  It stopped me from performing.  This fear stripped the happiness from my life.

In January 2018, I performed at a club in Orlando, Florida.  I had performed at this venue multiple times.  People would call the club asking when I would be back to perform and others would even ask the GM at the venue.

This Saturday night was no different than any other Saturday I had performed at this club.  The MC warmed up the crowd, did his jokes, and then introduced me.  I came on the stage, and started my set.  Next to the stage was a table of 10 individuals.  Most of them were on their phones, not paying attention to me.  Which was fine, until one woman actually started to talk on her phone! I kindly asked if they could please put down your phones that would be great.  She looked at me and continued her conversation.  I was bit annoyed that this woman had the nerve to sit in the front of the club, near the stage, and take a phone call.  But I let it be.  You can’t teach people manners. I just turned my body positioning and focused on the other side of the room, the room paying attention.

After I got off stage, I walked to the back of the club where the comedians and their friends usually hang out, drink, and watch the other comedians.

No less than 2 minutes later, the woman who I had asked to put her phone down, came up to me and started yelling.

“Don’t you ever embarrass me like that again! I paid for my tickets, I have every right to be on the phone if I want to.  You can’t tell me what to do,” she continued until security intervened and told her to go sit down.

Just to be clear, she didn’t pay for her tickets.  All tickets to this venue are comped.

Moments later her husband approached me.  He is an ex-Army man – stocky built, much bigger than me.

He got right up to my face and started yelling at me, as well.  I could feel the spit of his words bounce of my face.

“You are so rude.  You have no right to be rude to us.  If you ever, ever, threaten someone in my family again, I will personally take care of you.”

I didn’t flinch or back down.

I wasn’t going to let someone intimidate me.  Especially when I didn’t do anything wrong.

But he had so much anger in him.  He kept yelling at me and threatening to “take care of me”.

While the audience in the back stood by and watched this all unfold, two women stepped in to help.  However, he kept yelling and getting closer and closer.

Finally, the MC of the night saw what was transpiring and pulled the gentleman away from us.

At the end of the night, four people including security walked me to my car because I was a bit shook up.

But it didn’t stop there.

This man and his wife went on Facebook and posted a picture, tagged the club, and wrote “I brought a group of bloggers to the show tonight.  We had a terrible time thanks to this Comedian.  I will never support a show she is on.  This comedian accused of us being rude because we were blogging about the show during the show!  My group has supported this club for over 15 years ask blah blah blah.

The worst part was that he tagged 50 people including other comedians I work with in this embarrassing post.

From some fact checking and a quick google search, they aren’t professional bloggers.

His friends chimed in all night with comments like, “she looks like a bitch”, “she’s not funny”, she’s ugly, “no one even noticed here, we were there for the headliner, who killed it, probably why she was rude.”, and the list goes on.

Some of his friends understood the issue and commented, “Wait what? Y’all were blogging during the show?”

Sadly, most of these comments were from women.

For more than 24 hours, people continued to post negative feedback about me.  People who had never met me or seen me perform.

None of the comedians that performed with me that night stepped in to defend me even though they were tagged in the post.  I had worked with the headliner of the show for over three years, and even he didn’t say anything to defend me or diffuse the situation.    Even when the comments were directed at him, such as, “Why would you let someone so disgusting open for you?”

However, a few comedians who knew me and my reputation stood up for me.  It was nice to see comedians step up and say that I’m not confrontational, rude, or violent.  Even though these people were trying to ruin my reputation, others who knew weren’t fooled.   Finally, after 24 hours Facebook removed the post for harassment.

The best comment was from the husband himself, that really got to the issue at hand: “Most of her act is about being a Muslim.  As a Military Vet (Army) that can wear on you after a while.  The funny thing is that we were trying to find something positive to say about her.”

But the story doesn’t stop there either.  The husband and wife sent an email to the club.  In their email they accused me of putting the woman in a choke hold.  Now you all don’t know me like that, but I’m a professional.  I’ve worked in corporate America for more than 10 years.  I know when not to cross the line, and being physically abusive towards someone is not in my DNA.  However, this couple made a complaint against me.

Since that day, I’ve never been asked to come back to this so-called club or to work for this club.  Whether it’s because the club owners believed I was physically violent or for another reason, I don’t know.

What I do know is that the actions of 2 people changed my love for comedy.

I allowed fear to stop me from performing for 4 months.

In those four months I made a bunch of realizations.  I realized that the couple was dealing with something that night.  I realized that their anger wasn’t directed at me, but something bigger than me.  The fact that the comics that night didn’t defend me talks volumes about their character not mine.  I need to surround myself with people that will stand up for me when I’m in danger.  The club that doesn’t want me to perform for them anymore lost a valuable comedian.  There are more clubs out there and that not working for one isn’t going to ruin my career.

What I’m trying to say is that while fear can hold you down in the short-term, you have to pick yourself back up, put yourself together and continue to go out there and slay.  Don’t let anyone take your shine.  You deserve to be out in the world sharing your talent.  Just because some people are intimidated by it, doesn’t mean you stop.

And when I look back at those four months that I didn’t perform comedy, not all was wasted.  It was during that time I crafted my podcast and started to put together the pieces to make it come to fruition.  Because I was so scared to perform at any club outside of the Orlando area, I decided to start pitching myself to corporations and colleges.  A safer environment.  From redoing my website to working on my social media, I was able to book more private events in 2018 than my entire career. I also used the time to taking acting classes which led to my first commercial.

What I’m saying is that if fear is stopping you, don’t let it.  Don’t allow yourself to stall in your creative journey because of one mishap or failure.  Find new ways to share your vision with the world.  Keep pushing forward. And most of all, keep creating! Because if you don’t do you are doing a disservice to yourself and to the people around you.

And be kind.  I spent the entire night and day crying over this incident.  All types of emotions had taken over me.  I was sad, angry, humiliated.  This was my passion, my career to a degree.  And within 24 hours someone was trying to damage my reputation not only publicly but also with comedians that I worked with.  To this day, some of those relationships haven’t been fixed.  In a split second I went from being the headliner that night’s feature act to never working with him again.  All I’m saying is this industry is hard enough, please don’t make it harder for us.  If there is an issue, let’s talk it out.  Your actions in a fit of anger could have led to severe consequences for me.  Luckily, I am a strong person and was able to allow my character to speak for itself.  But the next person may not be a strong.  Let’s be kind and respectful.  You don’t know what someone is else is going through.

With that – now go flex your creative muscle and keep winning.